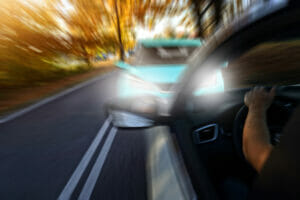 Thousands of passengers and motor vehicle drivers are severely injured or killed in head-on collisions every year in the U.S. In fact, head-on collisions resulted in 3,613 deaths in 2019. The majority of head-on crashes involve one vehicle exiting their lane and crashing head-on with oncoming vehicles moving in the opposite direction. But what causes these serious and potentially fatal car accidents?

In most catastrophic head-on collisions, one of the drivers loses control of their vehicle or becomes distracted. The following driver actions or behaviors can often cause head-on crashes:

What Happens to People Involved in a Head-On Collision?

A lot can happen during the split second where two vehicles crash head-on at high or even moderate speeds.. A study about head-on crashes found that unrestrained vehicle occupants are particularly vulnerable to catastrophic injuries and death. The speed at which two cars approach each other (closing speed) is usually too fast to let the drivers respond properly to the situation. Once the two cars collide head-on, the occupants will be hurled forward. Depending on the severity of the impact, the accident might throw the occupants out of the car.

Another study by the Insurance Information Institute, a test dummy manufacturer, and the AAA Foundation for Traffic Safety found that a head-on collision in which two similar cars are moving at roughly the same speed would cause multiple bone fractures and severe neck, spine, or brain injuries.

Both of these studies also found that wearing seatbelts can greatly help reduce the occupants' injuries. Additionally, they suggest that drivers can avoid head-on collisions by being more aware of their surroundings when driving, not driving while intoxicated, and driving defensively.

If you have sustained injuries in a head-on collision due to another driver's negligent acts, you can count on the competent Texas car accident attorney at the Rose Sanders Law Firm, PLLC, for help. We offer free case reviews and consultations so that you can find out all about your claim.  The attorneys at Rose Sanders Law Firm, PLLC, can handle all aspects of your personal injury claim. We will help you seek compensation for your medical bills, wage loss, pain and suffering, and other hardships. Our experienced car accident lawyers fight for injured car accident clients across Texas from our offices in Houston, Dallas and McAllen.

During your free consultation, our skilled Texas car accident lawyers  will evaluate the facts of the accident and determine how much financial compensation you could potentially recover to figure out the best legal options based on the specific circumstances of your case. Call 713-231-9288 or contact us online to schedule your free consultation today.

How an Insurance Adjuster Determines an Injury Settlement Offer